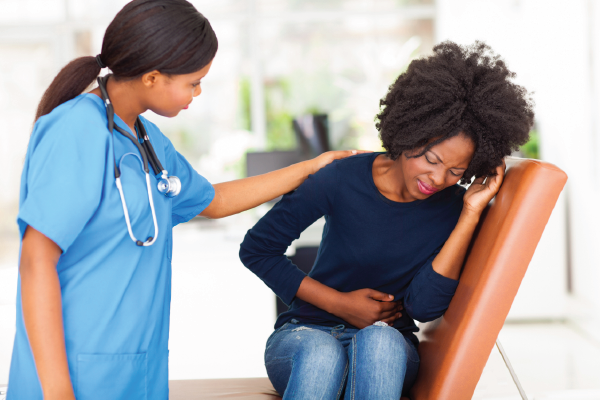 The surprising reason you’re getting side pains once a month

Mittelschmerz is a weird word for a not-so-weird phenomenon.

In fact, it’s so common that about one in five women experience it on a monthly basis, says Dr Nicole Scott, a gynae at IU Health.

So what is it? Technically the word is German for “middle pain”, and it describes a sharp ovulation pain on one side of your lower abdomen that occurs once a month around the time your ovary releases an egg into your fallopian tube, according to the Mayo Clinic.

That’s right, some women can feel when they release an egg.

“It is a real phenomenon and in my experience it’s fairly common,” Dr Scott says. “But not all women experience it, and some women may experience it to different degrees than others.”

Eggs can be tricky things. As a woman, you were born with about two million eggs (technically, they are immature eggs called “follicles”) and that is all you will ever have.

Unlike men, who continuously create sperm throughout their lives, eggs are a limited supply. While it varies from woman to woman, 95% of women will have less than 12% of their eggs left by age 30, according to a study published in PLoS ONE.

During your fertile years, each month one egg ripens in one of your ovaries and roughly two weeks before your period starts, the ovary sends a signal to your brain that it’s time to pop the egg out, Dr Scott explains.

And “pop” really is the right word for it.

“The egg is released from a developing follicle or cyst in the ovary, but because there are no openings in the ovary the egg actually bursts through,” she says.

While that definitely sounds painful – bursts? – most women don’t feel a thing.

But those with mittelschmerz report feeling a sharp, short pain, sometimes accompanied by a lingering aches on the side from which the egg was released. It’s a totally normal experience and it doesn’t mean anything is wrong, Dr Scott says.

What’s more, while some women feel it every month, on alternating sides of the body, others only feel it every couple of months, and always in the same side. That’s because your two ovaries take turns releasing their eggs.

However, there is an upside to ovulation pain: If you’re tracking your fertility, knowing exactly when you ovulate can help you be more accurate in identifying your fertile days and predicting your next period. Think of it like your secret, slightly strange superpower?

What to do about it

Because ovulation pain is typically brief and mild, you don’t need to do anything for it, but if you’re feeling particularly achy, it’s fine to take ibuprofen, Dr Scott says. Some women find relief with hot or cold packs.

There are a small number of women who find mittelschmerz to be extremely painful and say it interferes with their lives. So if the pain is really disruptive and tests can’t find any other reason for it, birth control pills can prevent ovulation and, therefore, mittelschmerz, she explains.

Not all mid-cycle abdominal pain is ovulation pain, however. Things like ovarian cysts, fibroids, scar tissue, cancer and a life-threatening ectopic pregnancy can sometimes cause similar pain at first.

The difference is that those will often cause pain that increases in intensity and duration. If your pain is not 14 days before your period or lasts longer than three days, it is probably not related to ovulation and you should consider other causes she says, adding that if the pain lasts more than two weeks, it’s time to call your doctor.

In the meantime, mittelschmerz makes for a good party trick. Imagine being the girl who can say, “And I just dropped an egg… now!”

The Urology Hospital, the only specialised hospital of its kind anywhere in Africa, has been in existence for more than 20 years as a centre of excellence in its field.

With more than 20 urologists under one roof, it offers unparalleled expertise in urology using the latest in highly specialised technology as well as nursing staff specially trained in urology. The hospital specialises in the treatment of male, female and paediatric urological conditions, including prostate cancer, kidney stones, bladder control problems and pelvic floor. Other common procedures performed at the hospital include: circumcisions, vasectomies, prostatectomies, nephrectomies (removal of the kidney) and male infertility. The hospital maintains its association with the academic world to ensure ongoing research, medical education and training in the development of urology.

We look forward to welcoming you for a consultation. Should you wish to see a consultant for a urological concern, please do not hesitate to contact our office on (012) 423 4000 or email urology@urology.co.za

Coming To The Urology Hospital

The safety of our patients and colleagues is our number one priority. Your healthcare is important to us and we are actively working with and following guidance from the National Department of Health and the NICD (National Institute for Communicable Diseases).

Kindly note the hospital has set up a Covid-19 task team and contingency plan and we are preparing for all eventualities.

Please confirm with your Doctor if you are still able to come for your consultation. However, if you have any of the following signs and symptoms then please cancel your appointment, self-isolate and contact the centralised helpline on 0800 029 999:
• Fever
• Cough
• Shortness of Breath

To support screening for COVID-19, before entering the hospital, all prospective patients will adhere to the following:
• Complete a Travel History form
• Undergo temperature screening

Should any of the following signs or symptoms be found, you will be requested to go home, self-isolate and contact the centralised helpline on 0800 029 999:
• Flu-like symptoms (sore throat, cough or chills)
• Fever of 37.8 or above

NB: Please notify the person doing your Travel History if you’re:
• Over 70
• Have any underlying health conditions
• Are pregnant

To protect our patients and staff from the potential risk of COVID-19, we are currently restricting visiting of patients to exceptional circumstances only.

In an effort to limit the number of patients visiting The Urology Hospital Pharmacy due to the COVID-19 pandemic, we will only assist our regular retail patients.  If you have a valid repeat script at The Urology Hospital Pharmacy, please call us in advance on 012 423 4036 to make arrangements to obtain your repeat prescription. We will then prepare it for you in advance. When collecting your script bring your purple script copy or previous medicine containers with you to gain access to the hospital.

Should you need to re-arrange an appointment at the Urology Hospital please call: 012 423 4000 or your Doctor’s rooms.

We appreciate your understanding and co-operation.