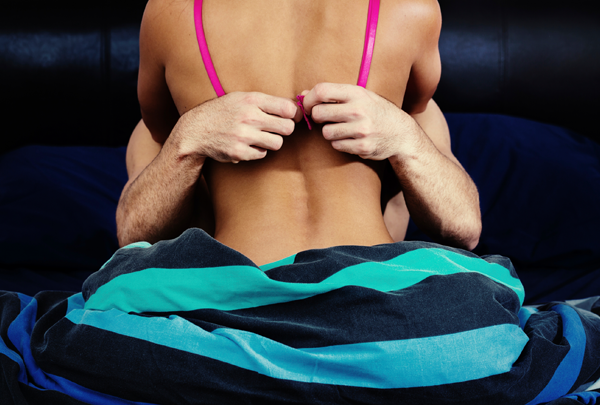 Can you have sex with a UTI?

Ugh, the fire ripping through your crotch – and the uncontrollable urge to go constantly. Face it: You’ve got a urinary tract infection or UTI.

The problem is pretty self-explanatory – it’s a bacterial infection in your urinary tract, most often in your bladder.

If you’ve had one, welcome to the club. As many as 40 to 60% of women are saddled with the infection during their lifetime, and one-quarter of women have recurrent infections, according to the National Institutes of Health in the US.

Why is it more common in women than men? Since ladies have a shorter urethra, it makes it easier for bacteria from the rectum, like E. coli, to cause an infection.

As if the symptoms weren’t bad enough, you also may be wondering if you can still get busy – that is, if you’re up for it. Here, your most burning (er, pressing) questions, answered:

Can sex make the infection worse?

Here’s the reality: Forget having sex right now, advises Dr Nicole Williams, founder of the Gynecology Institute of Chicago. Let’s just say things can go from bad to very bad if you get it on. “If you have sex with a UTI, it could actually worsen the infection by re-seeding the bacteria that caused the infection in the first place,” Dr Williams says.

Can you pass a UTI to your partner?

No, UTIs aren’t contagious. Whew! That said, research shows STDs are commonly misdiagnosed as UTIs in the ER. (Symptoms can be similar.) And STDs are passed via sex. Therefore, someone may think they gave their partner a UTI when in reality, it could be chlamydia or gonorrhoea.

So when can you have sex again?

First, get treated. Your doctor may test your urine to confirm a UTI. Based on the results, they’ll likely prescribe an antibiotic. “Once your complete treatment course has been finished and you don’t have any more symptoms, then it’s probably safe to have sex again,” says Dr Williams. Usually, this takes one week, she says.

That said if you’re done with the antibiotics, but you feel severe pain or burning during sex, that’s a sign that your infection hasn’t quite cleared up. Save the friskiness for another day.

How do I make sure this never happens again?

You’ve also probably heard that you should pee after sex, to get rid of any lingering bacteria. While post-coital peeing can’t hurt, “it’s never been proven to reduce the risk of a UTI,” says Dr Williams.

If you’re prone to getting UTIs, talk to your gynae about cranberry pills, which prevent E. coli bacteria from attaching to the bladder wall, says Dr Williams. And remember: With treatment, you’ll feel relief – and get busy again – soon.